Directory resources are both a research tool and a valuable insight into your ancestors and what governed their lives.They can be invaluable when tracing ancestors in the 19th and 20th century, as census records were only available every ten years.

Pigot directories start around 1820 and cover the major professions, nobility, gentry, clergy, coach and carrier services, Taverns and Public houses of the areas. Entries include the name, trade and address.

Slater directories tend to be larger than the Pigots and cover the 1850s in a similar manner.

Watkins directories of London competed with Pigot and Kelly and produced directories that show occupations and go street by street showing residents.

Bulmer directories have a larger history section than others, normally before the directory information.

In Kelly's directories residents will also be listed. There are sections on each major town and surrounding villages, with a history of the area in a great deal of detail as you would find in a gazetteer. Information on the main trades, the chief land owners, the type of soil and even the coverage dates of parish registers can also appear. The later Kelly directories from 1890 onwards contain more residents and these are sometimes put in a section called the Court Directory.

Finally the Post Office Directories in the 1900's gave fairly complete listings for the residents and tradespeople of an area.

S&N publish directories on CD ROM in PDF format which can be read on any compatible device with a PDF reader such as Adobe Acrobat. They are searchable for most years apart from ones earlier than 1830 where poor quality typefaces or typesetting prevent them from being searchable.

These contain the images of pages in folders on the CD, and are not searchable by name. They can be browsed using Windows Explorer. They are marked as a 'Stepping Stone Publication' in the description. 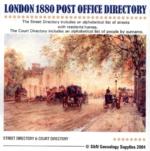